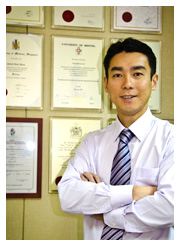 Dr Quah Hak Mien is a renowned colorectal surgeon, graduated from the University of Bristol (United Kingdom) in 1997. He received majority of his training in Singapore but had the opportunity to train overseas in Surgery at Glan Clwyd Hospital, United Kingdom in 2002. He obtained his Master of Medicine in Surgery from National University of Singapore in 2002. He became a Fellow of the Royal College of Surgeon of Edinburgh and a Fellow of the Academy of Medicine of Singapore in 2005. In 2006, he was awarded the SingHealth HMDP award for further training subspecialising in Colorectal Surgery. He went for his fellowship training at Memorial Sloan-Kettering Cancer Center in New York, USA in 2006. He had the privilege of working with Late Dr Douglas Wong, who was the Chief of Colorectal Service, focusing his clinical training and research on colorectal cancer, in particular, sphincter-preservative surgery for rectal cancer and recurrent pelvic cancer operations. His clinical interests are in the areas of prevention, endoscopic diagnosis and treatment of colorectal cancer.

Dr Quah was formerly Consultant at the Department of Colorectal Surgery, Singapore General Hospital. During his time in Singapore General Hospital, he held the post of Director of the Singapore Polyposis Registry. He was also Visiting Consultant to the Department of Surgical Oncology, National Cancer Centre of Singapore. He also held concurrent appointment of Adjunct Assistant Professor with Duke-NUS Graduate Medical School.

He has also developed expertise in functional bowel disorders and pelvic floor disorders, such as patients suffering from chronic constipation, obstructed defaecation syndrome, faecal incontinence and rectal prolapse. Another area of interest is that of perianal diseases and haemorrhoids (piles). He has published numerous academic articles in local and international peer-reviewed journals and book chapters. And he is a reviewer for the Singapore Medical Journal and Annals of Surgical Oncology.

SENDS US AN ENQUIRY

Closed on Sundays and Public Holidays